After decades of silence, growing numbers of Khmer Rouge survivors in Cambodia are now challenging the stigma around sexual violence. They are speaking out about their experiences of forced marriage, rape and sexual abuse suffered under the regime. In courtrooms and classrooms, from civil society forums to family tables, survivors are revealing hidden dimensions to their suffering that continue to impact Cambodian society nearly 40 years after the Khmer Rouge collapsed.

Breaking the Silence contrasts interviews with experts and survivors with courtroom footage from Case 002/01 and Case 002/02 at the ECCC to explore the multiple dimensions of sexual and gender-based violence, including forced marriage, committed against both men and women during the Khmer Rouge regime, also known as Democratic Kampuchea.

The 50-minute English-language film forms part of the British Government’s Preventing Sexual Violence Initiative, and was produced by AIJI in collaboration with Khmer Mekong Films (KMF).

Breaking the Silence was launched in Phnom Penh on 24 April 2017 at a screening attended by members of the Cambodian Ministry of Women’s Affairs, UN Women, foreign embassies, NGO workers and ECCC staff. Other public screenings have since been held at Metahouse and Destination Justice in Phnom Penh, and at Stanford University and the East-West Center in the United States. 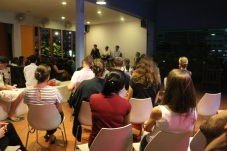 For more information about the film check out the website or watch the trailer here.